PARIS
Steven Spielberg was in his mid teens when Lawrence of Arabia opened and he saw it for the first time. Until then he had planned to go to medical school. After watching the movie and becoming "pulverized" by it as he said in this video, Spielberg decided to embrace a movie career.
Watching David Lean's masterpiece for probably the 10th time last weekend on a giant screen at the Grand Rex in Paris, an Art deco marvel of a movie palace, just a 20-minute walk from my apartment, once again I fell spellbound by the magic of this  movie, whose showing is part of a series of festivities to celebrate the reopening of movie theatres after the three-month Covid-19 lockdown.

The movie buff I am stopped going to movies a decade ago, preferring the intimacy, comfort and efficiency of watching them at home. But when I saw that "Lawrence" was going to be shown on that gigantic screen, the best way to admire the full sweep of this epic, I knew I had to go.
The lights dimmed, the curtain closed on the smaller screen, the giant screen was lowered while the music from the soundtrack played for several minutes before the famous Columbia logo appeared to wild applause from the audience. I was pleasantly surprised to see that the majority of the crowd were people in their twenties and thirties. I would have expected an older crowd as befits  a movie made almost six decades ago.

From that matchstick-in-Cairo-to-sunrise in Arabia transition (maybe the greatest cut in movie history, with the bone-to-spaceship cut in 2001: A Space Odyssey a close second) to the battle scenes, the constant left-to-right movement to  reflect a journey, everything in this film is superlative. (Here's a video clip of the cut which includes a piece of the score )
The intelligent script and brilliant dialogues is brought to life by the tour-de-force performance by Peter O'Toole (considered by many as one of the top 3 performances in movie history - the other two being Marlon Brando in On the Waterfront and Meryl Streep in Sophie's Choice) ably supported by flawless Omar Sharif As Sharif Ali and Anthony Quinn as tribal chief  Auda Abu Tayi and an astonishing Alec Guinness whose resemblance with the real Prince Feisal had locals on the set in Jordan believe they were meeting the real one.
Often copied by later directors (George Lucas, Ridley Scott, Martin Scorsese, Oliver Stone) but never surpassed is the legendary photography. The majestic shots of the desert (which I can relate to having spent several summers in my childhood in the Mauritanian desert) are by now seared into viewers' retina and further enhanced by Maurice Jarre's soaring music. If you're watching it at home, watch the scene with Lawrence on the captured Turkish train without the music and then with it - you'll see the difference. David Lean's movies fuse sights and music like no other director until then or after. With Maurice Jarre he found a soulmate - and although Jarre would go on to compose scores for many movies by other directors, he only won Oscars for the ones he made with Lean. 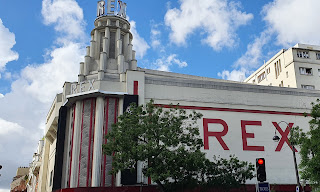 The conquest of Aqaba is hard to surpass and remains unforgettable: from the moment the   Arab troops leave their camps and are seen through a beautifully shot mountain pass to the moment they enter the town, gallop through its streets, pass the giant cannon which Lawrence had rightly predicted couldn't be turned and end in the Red Sea. From one immense area (desert) to another endless one (sea).
The long-shot floating mirage of Omar Sharif is unequalled and repeated viewings of the movie can't dim its power.

What makes it an even more amazing experience is that anything you see on the screen is "real", inasmuch as anything in cinema is real. No computer gimmickry, no fake twisters or background shot added to live animation. What you see and hear is real: towns, cities, camps, oases,a cast of thousand real humans, even the soldiers are real, as they were lent by King Hussein of Jordan from his own army since most of the movie was shot on location where the action took place several decades ago.
Interesting piece of trivia: King Hussein (a grand-  nephew of Prince Feisal) was a constant visitor on the set where he met a young Englishwoman who became his wife. Their son is now Jordan's King Abdullah II.
When the movie ended after 3hrs45 (including intermission) it was to rapturous applause. I looked around and felt that there is hope if the younger generation can see what true cinema is about and enjoy it.
I could continue to wax lyrical on this movie but I think you got the gist of it: Simply put, this is the best movie ever made, a "miracle" as Spielberg called it, a film which you can watch again and again and always appreciate and discover new things. Through the decades as you become more mature you'll appreciate different aspects of it.  But at least once in your life, do yourself a favor and watch it on a giant screen to fully appreciate the Super Panavision 70 scope: I guarantee that you'll be blown away by the experience.
This is the latest in a series of  the blogger's posts dedicated to movies. Previous blog posts include:
-Feb. 2020: Time for the Academy to honor non-English-speaking films with Korea's "Parasites"
-Dec. 2014, Happy 75th Anniversary, "Gone with the Wind"

-Nov. 2012, Woody Allen or the Vanishing of a Once-Great Filmmaker
-Feb. 2012, Meryl Streep, or how to be the world's greatest actress for three decades - and counting-March 2011, The Unbearable Dullness of the Academy Awards