FOR SALE: Software firm HR Access going on the block

You will not see the following ad in the Financial Times or Wall Street Journal, or any IT trade publication, but you might as well. After almost 10 years trying to shape HR Access into an outfit to serve its changing purposes, investment firm Fidelity is throwing in the towel. The software company it bought in 2003 from IBM is up for sale.

I discussed in an April 2010 post ("Is Fidelity Still in the HR Services Business?") some of the recurring problems faced by HR Access and I predicted that Fidelity would sell off the company. Two years on the problems haven't been solved and Fidelity is now actively looking for a buyer to divest itself of what has turned into a failed venture. Its dream of ever recovering the staggering amounts it has plowed into the French company are unlikely to ever materialize. 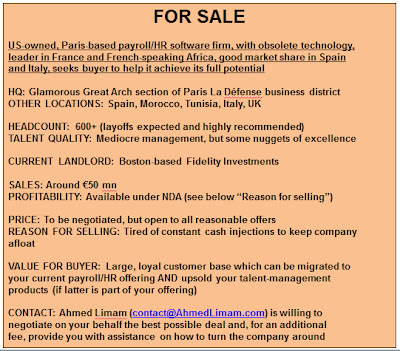 So, who is the likely buyer?

- Payroll outsourcing giant ADP could be interested (rumor has it that it did express some interest.) It has experience buying European payroll providers: as recently as 2010 it bought Logica's payroll business in the Netherlands and Italy's payroll leader, Byte. HR Access will help it expand its market share in countries where it is already a leader. But being a leader in the markets where HR Access is strong may not constitute a big incentive for them, unless the price is particularly attractive.

- SAP is also a leader in France and Italy, but less so in the payroll business. And since PeopleSoft is still strong in France, the acquisition could strengthen its hand. The fact that both SAP and HR Access have one of the largest employers in Europe as a customer (the French government - SAP for HR and HR Access for Payroll), this could be a good opportunity to consolidate both into one single project and offering. And as a European company, the cultural fit may be closer than ADP (or Fidelity for that matter.)

- Meta4 could do well with HR Access's customer base especially since they operate in the same geographies. However, Meta4 (whose business has been as stagnant as HR Access) is going through a bad patch now, so any merger would be a case of the broke leading the broke. Or Sopra, one of the top French IT services company with a well-known HR product, Pléiades.

- One cannot rule out Oracle, the serial acquirer if there ever was one. But with Oracle's focus on the cloud/SaaS business, HR Access may be too small to feature on its radar.

- What about the various private-equity firms that have invested hundreds of millions of dollars recently acquiring HR companies? Maybe legendary KKR, owner of fellow European Northgate Arinso, could see the opportunity to increase its  market share in key European countries. Sure, that means adding  one more product (and many versions of it, to boot) but NGA's portfolio is already so large that managing a couple of additional products should not change much.

Whoever makes the move better have a good strategy in place AND ensure execution follows through, otherwise it will be yet another case in the software industry of throwing good investment money after bad.