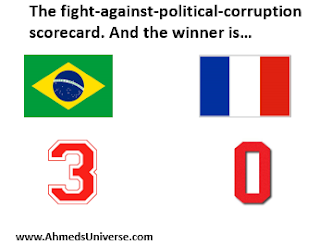 I recently came back from one of my regular stays in my home away from home in Brazil. On the very day that I arrived in Rio de Janeiro there was only one headline news topic: Former president Michel Temer had been arrested on corruption charges. (During my last stay in December my Copacabana neighborhood only gossiped about another fallen leader, former Renault-Nissan head Carlos Ghosn, whose swanky Nissan-owned penthouses, just a couple of blocks away from mine, was being searched and confiscated.)

I couldn't help compare the situation in Brazil with the one I left behind me in France.
As the below diagram shows, Brazil isn't shy about firing its leaders or putting them behind bars when caught rend-handed. There is little doubt that there is more corruption in Brazil than in France but then why is there more tolerance in France? Back in 2011 I wrote a blog post denouncing France's Real crimes, Fake justice when former President Chirac was condemned to 2 years in jail but...never set foot in one!

Could it be that this old, wealthy "democracy"'s political system is so rotten at the core and despises its citizens to such an extent that it doesn't even pretend to have a clean justice system? I am more and more inclined to think along those lines based on facts such as those summarized below. Actually, if you wonder why I put "democracy" between quotation marks it is because i stopped  a long time ago to believe in representative democracy and, 7 years before the Yellow Vests movement took France by storm calling, among other things, for direct democracy I advocated the exact same thing in my blog post on DirDem vs RepDem as I called the old and new political system.

The lesson one can draw from this situation is that, contrary to appearances, a young, chaotic, developing country such as Brazil can teach those most established so-called democracies a lot. It always makes me laugh to hear "First" World leaders pontificate and give advice to their "Third" World counterparts, oblivious to the Biblical injunction that before seeing the mote in others' eyes, they should remove the beam in their own eyes.


(Other blog posts exposing the shortcomings of the French political system include, in addition to the ones mentioned above, the following:
- October, 2018: The Increasingly Undemocratic French Constitution
- May 2017: Thoughts on the French presidential election
-May 2012: Good riddance, Sarkozy!)