Silver Lining, or How I Got to Love the Virus 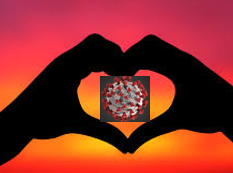 With half of mankind under house arrest and the global economy in a tailspin, not mentioning tens of thousand of deaths, it is hard to feel anything good about the invisible enemy which we are told should go by the politically correct Covid-19 or Coronavirus name, rather than by what everybody would instinctively call it: the Chinese virus, just like a century ago we referred to the Spanish flu - although back then the flu had nothing to do  with Spain whereas this one clearly originates from China.

And yet, there are quite a few unexpected positive developments from the global pandemic.

Finally, pollution is down
With millions of cars off the roads and plants shut down in many countries, it is hardly surprising that air pollution has come down, as the two below shots reveal. Some might even think that the current pandemic is nature's way to get revenge against man's constant abuse for decades. Can't blame it, to tell you the truth.

Drug traffic and crime down
As some police have been forced to recognize, it is humiliating that an invisible virus, by keeping dealers and customers off the streets, has drastically  reduced the illegal drug trade, thus succeeding where governments all over the world have failed consistently for decades. Home burglaries have basically disappeared for obvious reasons. In my beloved Rio de Janeiro, street mugging, a common occurrence, has been reduced by more than 60% this month versus March 2019.

Digital Transformation is here to stay
Your IT team? Not yet. Your Agile coach? Not really. Your HR department? Yeah, right. Your Change Management team? Who are these people, anyway? Never seen them. 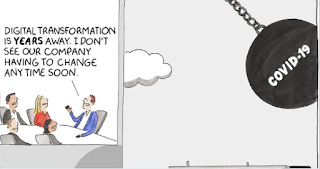 And suddenly Covid-19 lands on us and we are all working from homing, using technology at full throttle to communicate/engage/get things done. As someone whose professional life entails helping corporate clients' digital transformation, this pan(da)demic is a godsend.


Migration and tourism are halted

Now, some of you might think that the endless waves of migrants landing on Europe's shore is a blessing but many might beg to differ, and now that the EU has closed its borders to all non-Europeans and residents, the flow of millions of illegal immigrants has come to an abrupt end. Hss it?
Another category of migrants, short-term and illegal, a.k.a. tourists, are also being rebuffed and considering the damage these hordes inflict on sites and places like long-suffering Venice, Covid-19 is definitely a blessing in that respect. Maybe we'll go back to the 1950s where mass tourism was unknown and traveling the globe was truly a unique, sometimes once-in-a-lifetime experience.


Market volatility offers great opportunities
Stock gyrations can offer great overnight gains. Some stocks go up and down several times in the same trading day. If you have some money saved which you don't need in the short term, pick a couple of stocks at the lower end of what they have been trading and a quick buck is almost a sure thing. One piece of advice: pick dividend-paying stocks so that in the unlikely case all the stocks you bought suddenly go south and stay there at least you get a steady income stream.


Some jobs are coming under strong demand
Last December's general strike in France which lasted a good month and a half (no metro, no bus, no trains) , saw some unemployed people suddenly sign up for Uber and with ride fares tripling many of them became a rags-to-riches story. Even people with a  day job took to using their car for additional income, proving the old adage that one should never let a good crisis go to waste. Now, that restaurants are closed, and many people are scared to go to crowded supermarkets UberEats, and Deliveroo delivery men are enjoying brisk business. Macy's may be shedding gallons of tears along with rivers of red ink, but Amazon is on a roll. 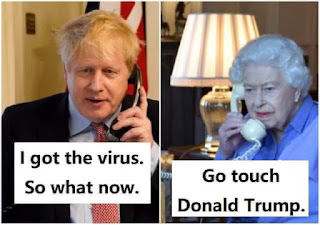 Quality time with your family
Those of you whose rat-race lifestyle meant spending too little time with your spouse and/or children, here's your once-in-a-lifetime opportunity to make things right. That is, if spending so much time at work wasn't a way to get away from your  family in the first place...

History: If you think the current pandemic is bad, read Barbara Tuchman's Distant Mirror on the Black Death, or how the plague pandemic in the Middle Ages was called: Some countries like England lost half of their population. Feels almost like a relief, doesn't it?

Literature: You may have heard of, but never read, A Confederacy of Dunces by John Kennedy Toole. This is the perfect time to read this picaresque novel whose counter-hero Ignatius Reilly's adventures are simply hilarious. If you read French, Céline's Voyage au bout de la nuit (Journey to the End of the Night), L'élegance du hérisson (The Elegance of the Hedgehog), the full 6-volume set of  Les rois maudits (The Accursed King)  are a must. In Spanish, I highly recommend Mario Vargas Llosa's La tia Julia y el escribidor (Aunt Julia and the Scriptwriter) and  political page-turner La fiesta del chivo (The Feast of the Goat).

For sheer comic relief, anything by P.G. Wodehouse, especially the Bertie series, is a must read. In the same vein, Frasier sitcom writer Joe Keenan's Blue Heaven and Putting on the Ritz will have you laugh uproariously.

If you have a soft spot for thriller/crime/spy stories: John Le Carré's The Spy Who Came in from the Cold is the mother of all spy novels (I'm not crazy about most other Le Carré novels that I find a bit on the dull side). France's Pierre Lemaitre's Robe de marié and Alex are excellent, as is the unique dual-story line La caverna de las ideas, a virtuoso Spanish-language historical mystery novel published in English as The Athenian Murders. Another even more unique whodunit is perfectly titled The Daughter of Time aiming at discovering whether Richard III was the real murderer of his nephews five centuries ago. Of course, you can't say "whodunit" without mentioning the Queen of Crime, Agatha Christie herself: Curtain, published posthumously, will shock you. Of course she spawned many spoofs, my favorite being The Act of Roger Murgatroyd, written in the vein of the grand dame's novels including idioms and contemporary references.

MOVIES
I'll avoid some obvious classics and focus on lesser-known films that will enchant, shock, surprise and amuse you. Starting  with the film noir genre, Laura  is as brilliant now as it was 75 years ago. Hitchcock's 1964 The Birds will still amaze you with special effects that will put current computer wizardy to shame. No Way Out's ending will shock you. French-language L'assassin habite au 21 (1942) is sheer brilliance (interestingly, I discovered in a Rio de Janeiro second-hand bookstore, or sebo, Hotel Brasil which seems to be inspired by the Clouzot film.)

For wit, brilliant dialogue, great story line and flawless performances by the full cast, Woody Allen's Bullets over Broadway is a joy to watch again and again (I must have done so close to 20 times.) Little Miss Sunshine and A Fish Called Wanda are two other brilliant comedies. Mockumentary Thank You for Smoking may not make you kick the habit, but it will have you convulsed with laughter, as will the Coen Brothers' Intolerable Cruelty.

If you're into musicals, Victor Victoria is a gem with its fine performances, brilliant script and great score. Almost 90 years old, The Most Dangerous Game hasn't aged a bit (and no, it's not a musical, just had to wedge it somewhere.)

Feeling like a Roman epic of yore? I have little doubt you'll enjoy Quo Vadis with an amazing Peter Ustinov as the Emperor Nero, as well as Samson and Delilah starring Hedy Lamarr, the most beautiful woman ever to have graced the silver screen.

The citizen of the world I am cannot but mention great movies from Brazil (Central Station, City of God), India (Salaam Bombay), the Arab World (The Yacoubian Building which also doubles as a great novel by Egypt's best writer, Alaa Al Aswany), Germany (Goodbye Lenin, The Downfall with its companion reading piece, Hugh Trevor-Roper's The Last Days of Hitler, one of the best historical works ever written), Italy (Rocco and his brothers, I soli ignoti, Lo scopone scientifico), Japan (Spirited Away) and in Spanish little-known thriller The Hidden Face and Almodóvar's farce Women on the Verge of a Nervous Breakdown.

With this last title, I cheated on my promise to go with little-known movies, so in for a penny, in for a pound, let me add two more in the same vein: Billy Wilder's Sunset Boulevard (picture me taking a bow, as I do every time I mention the master's name) and Mankiewicz's All About Eve: If the former is the best movie made by Hollywood on Hollywood, the latter is a sui generis tribute to Broadway


So, now that you can breathe a cleaner air, see bluer skies, made a quick buck playing Wall Street, feel safer that crime is down, enjoyed (re)discovering great reads and movies, be honest: Aren't you going to miss the big bad virus?