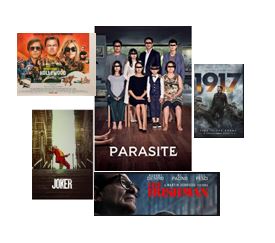 I had planned to end the weekend by going to the theatre but had forgotten that in Spain's second-largest city theatres have only one show on Sunday and it tends to be in the afternoon. Having missed it, I decided, instead, to watch one of the most talked about movies of the year, "Parasite" by Korean director Bong Joon-ho.

To say I was mesmerized wouldn't do justice to this exceptional movie: part comedy, part thriller, part drama, it brings a very subtle take on the class struggle.  When I was done, I was lost in my thoughts for several minutes, usually a sign I have just been watching a masterpiece.

As luck would have it, in several hour's 'time the pompously-named Academy of Motion Picture Arts and Sciences will hand out its annual awards and "Parasite" is nominated in several categories, including Best Director and, quite unusually,  both as Best Picture and Best Foreign-Language Film (they call the latter a silly name now, so I'll just ignore it and continue with BFLF.)

It's a rare event that a foreign movie is nominated in both categories, and when it has happened (last year's "Roma", or two decades ago Ang Lee's "Crouching Tiger, Hidden Dragon",) Academy voters couldn't bring themselves to give a foreign movie top honors so they inevitably gave  it BFLF. Last year there was hope that with "Roma" history would be made - and it almost did as it won Best Director, a first for a foreign-language movie, but the top prize still remained elusive.

Time has come to finally shatter the glass ceiling and acknowledge "Parasite" for what it is: the year's best movie. I have seen all the other contenders, enjoyed most of them, especially "1917" and "Once upon a Time...in Hollywood" but "Parasite" is so far ahead, in a category of its own, that it would be absurd, even by Hollywood's standards, to ignore it.

It is noteworthy, that, if in its 92-year-long history, the Academy has never awarded the  top prize to a foreign-language movie, it did pick a foreign movie when Best Picture (along with Director and Actor) went to 2011's The Artist", a French film. The only reason it did and felt good about it is the story is set in...Hollywood and the movie is...silent! In other words, for Hollywood the best foreign language is the one we don't hear.

Keeping my fingers crossed that in a few hours' time an injustice as old as cinema itself would finally be redressed. And, repeating myself, what better way to do it than picking this amazing filmmaking achievement?


The blogger, a film buff since he was tall enough to reach for the box-office and hand over his admission money, has written several blog posts on movies.

-Nov. 2012, Woody Allen or the Vanishing of a Once-Great Filmmaker

-Feb. 2012, Meryl Streep, or how to be the world's greatest actress for three decades - and counting

-March 2011, The Unbearable Dullness of the Academy Awards (yes, already writing about this topic)