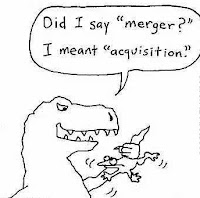 PARIS
My interest and experience in M&A activities in the HR services and technology space go back to Oracle's long, hostile and headline-grabbing acquisition of PeopleSoft in 2003. I was involved in the transaction, especially with the preparation of the case before the European Commission which had tried to block the acquisition on anti-trust grounds. (For those interested, this episode was the inspiration for some chapters in my book, High-Tech Planet: Secrets of an IT Road Warrior.)

Small wonder then that since I went solo two years ago I have been asked to track the mating rituals of the companies that make up the supply side of our profession and some of my findings can be found here. Sure, we are still a quarter shy of the end of 2011 and many choice morsels have already been gobbled up and are being digested. But, after the summer lull, there could well be some interesting activity, as evidenced by last week's acquisition by ADP of Asparity Decision Solutions. After all, many software companies are awash with cash and the stockmarket drubbing we are seeing means that many target companies are particularly inexpensive. This being said I do not expect any new acquisitions through the end of the year to significantly alter my findings. Should that happen, I would post an update in January.

Data and methodology
I have tracked all the acquisitions in the HR services and software industry since January 2010 where either the acquiring company or the target were based in the United States or in Europe (the only exception was SuccessFactors' purchase of Australia's Inform.) Although I also have data on other regions of the world, I have restricted myself to these two regions since they represent the lion's share of the worldwide HCM  market and M&A activity. The number of such deals was a neat 25, until ADP's latest move last week.

The first, general, comment that one can make is the surprising lack of any hostile operation. Apart from UK-based Sage and Dutch-based Unit4 slugging it out in early 2010 for the control of Polish ERP/HR vendor Teta, all acquisitions have been consensual affairs. The nasty PeopleSoft takeover by Oracle seems to be a thing of the past.

The average number of deals has been at least one per month (reaching in April 2011 a high-water mark with no less than 4 acquisitions announced in the same month, two of them by SuccessFactors). For this year we are already reaching 11 deals for just 9 months.

HR vendors are heeding Cole Porter's famous song Let's Do It and almost everybody is getting in on the act. Some, though, seem to relish it more than others especially SuccessFactors (2010's first acquisition was also the company's first in its history) and ADP. Apart from the latter, all are talent management vendors, providing further proof if necessary that this is still the hottest HCM market segment. (Actually some of ADP's transactions were aimed squarely at the talent management space.)

As befits the size of its home market, US companies are by far the most likely to engage in takeovers: 88% of the 26 acquisitions originated from a US-based corporation. However, when one looks at the nationality of target companies, European vendors are more likely to engage in cross-border acquisitions than their American counterparts, even if those are still in Europe (the only American company acquired by a European vendor in this period was Convergys by UK-based NorthgateArinso.) Of course, in absolute terms there are more European companies bought by US vendors than non-national companies by European acquirers (ADP and SuccessFactors with 3 and 2 cross-border purchases respectively are the most global of acquirers.)

A worrying development, probably due to the uncertain economic climate in 2011, this year has so far seen only 2 cross-border acquisitions versus 7 in 2010 which is hard to understand: the dollar may be weaker than many other currencies, but then it means that any investment will pay off handsomely and faster since the revenue will be booked in the stronger target company's currency. So why are American vendors so reluctant to engage in cross-border acquisitions? I can think of several European vendors who are just waiting to be snapped up, providing the acquiring company with, if not cutting-edge technology, at least a large market share and steady revenue stream. Asia and South America also have strongly established HR vendors who, in their fast growing markets, can deliver returns US (and European) companies are no longer used to.

A closer look at the average deal size shows little impact of the financial crisis, though. On the contrary, when we remove the unusually high value of Aon's Hewitt acquisition ($4.9 bn) which would skew the results and the transactions that included HR but went beyond (such as Infor's purchase of Lawson) we find that the average deal value almost doubled up from $66 mn in 2011 to $117mn. Two caveats are in order: many vendors (such as ADP) do not disclose the financial terms of their transactions and the 2011 figure is boosted by the $290 mn value of the SuccessFactors-Plateau linkup (other disclosed deals were way below the $100 mn mark.) The last quarter's performance will be crucial in either confirming this trend or reversing it.

Looking at the scope of the M&A transactions, we find that the three most  popular HR areas or processes covered are: analytics, learning and core HR. The first two reflect talent management vendors expanding their offering from their niche offering to the full gamut of TM, while the latter (Core HR) shows that some talent management vendors are moving up the value chain and want to be considered as full-fledged HCM vendors. For comparative purposes I have separated out the various components of the talent management function: otherwise the TM function represents almost half of the full scope.


Finally, I found it worthwhile to study the rationale for the M&A activities. My definition may well be controversial since there are always several reasons why a vendor decides to go down the acquisition route rather than the organic one, and I may not necessarily share the official reasons offered or I may give them a different weight.  There are usually five main reasons which of course tend to overlap (when ADP bought Byte in Italy last November  it was to increase its European footprint at the same time as increase its number of customers in a key outsourcing market.)

As the following graph shows, vendors are first and foremost interested in deepening their offering, that is adding higher-value features to their products, before broadening it. With one out of three deals involving two separate countries, it is hardly surprising that the second most important reason is to expand abroad. Although its pace is slowing down in 2011, globalization is still an unmistakable fact of the HR market and will continue in 2012. The question is whether it will be as strong as in 2010 or rather along the lines of 2011.

Another interesting question about 2012 has to do with Workday. Will the most scrutinized of HR vendors finally decide to enter the M&A fray (with the help of its freshly minted IPO) to buy its way into the recruiting or learning space or will it continue to look disdainfully on the whole exercize and carry on with its organic-growth strategy?


(Ahmed Limam will be in Las Vegas next week to attend the HR Technology Conference where he will present a session comparing  the US and Europe in terms of HR and technology.)
2 comments: