Land of the Morning Calm: Tips on implementing a global HRIS in Korea

Last year when I spent several days in Shanghai gathering the requirements for a client as part of an HRIS evaluation exercise, I realized this was the easternmost place on Earth I had ever reached. I am gratified to announce that I just beat my own record by spending a week in South Korea's sprawling megalopolis, finalizing an amazing global tour as part of the implementation of one of the largest HRIS projects in the world. This post aims at sharing some of my thoughts about one of the Asian dragons as well as provide tips on how to include a Korean subsidiary in a global HRIS project.

Hierarchical society
Korea's society will come across to first-time visitors as a very class-conscious one, not in the traditional British sense where one's place is determined by birth, but by the merit-based place one occupies in the corporate world. I was  struck by the constant bowing that takes place: whereas in the West people shake hands when they meet, in Korea, you take a bow, with the person occupying a lower rung in the social pecking order bowing lower - When you meet your company's CEO your body's basically at a 90° angle.

Small wonder then that your global HRIS will need to track the various statuses, grades and levels an employee enjoys throughout his employment life cycle (make sure you carefully identify which ones apply to the person and which to the position.) Just like Germans love to be addressed by their titles (Doktor and Professor have to be included in the name section of your HRIS) Koreans use their professional gradess as part of the name when addressing each other. "Good morning, Mr Lee M32"  - Bow. "Hello, Mr. Kim L11" - Deeper bow.

It was therefore quite revealing that in the workshop I ran, when we covered the list of dependents (to be used for benefits purposes), the value "Sibling" was found lacking. "We should have Elder or Younger Brother/Sister" I was told. And, of course, in this most deferential and hierarchical of societies expect your workflow to include several additional approvers as  it travels up and down the hierarchy.

Finally, make sure when you organize meetings, especially workshops where decisions need to be made, that you mix equals with equals. Should you have participants belonging to different rungs on the corporate ladder, you'll find out that subordinates will almost always defer to their superiors, never contradict them, thus preventing you from getting a full picture of the situation.

Strong culture of service and duty
Koreans will go to great lengths to do their duty and ensure the service they provide is first notch. Of all the countries I covered while I crisscrossed the globe none did their prerequisite homework so thoroughly and conscientiously as did the Korean team. I took the subway one afternoon and must have gotten my fares mixed up because, on the way out, I swiped my card but, after a shrill beep, the turnstile remained stubbornly stuck while a few Korean characters in scaring red danced on the small monitor. I must have looked confused or lost, or simply obviously foreign in this racially homogeneous society, because a rider stopped by, embarrassingly explained that I had insufficient credit  and then swiped his card to top me up. The turnstile opened as if by magic. I insisted  to pay him what I owed him, but he'd have none of it. "I just did my duty to a fellow human," he said. Try that in Paris or New York!

HR and Technology
South Korea (or, as it is known officially, the Republic of Korea) has gone through dizzying changes in the past few decades becoming an advanced economy, with efficient public transportation, technologically savvy (I'd even say obsessed) with a high mobile-device penetration rate (you know you're on a Seoul street when pedestrians walk with their eyes glued on their smartphones.) A global HRIS would have few issues rolling out its self service features to a nation whose mobile devices have become an extension of its citizens.

Although Korea has a vibrant democracy (they recently impeached their president on corruption grounds- a first for the country, while France is still considering whether to prosecute a former president on similar charges), there is one thing it shares with China: social media and other tools that we take for granted in most of the world are largely absent in Korea. Don't message anybody on WhatsApp -  you are unlikely to receive a reply. Facebook and Uber don't fare any better, either, as Koreans rely on homegrown tools. Global HRIS vendors face an uphill battle to penetrate this market with only a handful of mainly multinationals adopting Workday, SAP or Oracle, midmarket businesses remaining largely impervious to them, in the absence of good localization work. To take one example, none of the SOW vendors provide the controls needed for Korean address formats.

Going lunar - not lunatic
Reminiscent of a requirement I saw in Saudi Arabia, Koreans use a dual calendar: Western and lunar. By way of consequence, employees will display two ages: the one they have according to a Western calendar, and the one based on a lunar calendar. Make sure your global HRIS can handle this seemingly puzzling requirement. Some allowances are paid depending on the lunar date, and if you feel like wishing an employee Happy Birthday, make sure it's the lunar one, not the Western (or "Sun" one as I heard it referred to.)

Compensation and Payroll Interface
Since it is most likely you'll be interfacing your Core HR tool with a Korean payroll (none of the three global HRIS vendors - for whom I coined the acronym SOW - has released a Korea cloud-based payroll), figuring out where to place the cursor between Core HR (Compensation) and Payroll will be quite a challenge. Just ask Samsung Electronics, embroiled in its attempts to interface local payroll PDSS with one of the SOW vendors.

Vibrant modern culture within a traditional society
Adhering to a deferential culture (where women tend to play a submissive role), proud of its history and traditions (I strongly recommend visiting the royal palaces in Seoul such as Gyeongbokgung Palace pictured here), Korea's modern culture punches above its weight. Korean filmmakers have made a name for themselves on the map of world cinema: A recent Korean movie I enjoyed is The King's Case Note, part-historical drama (set in the Joseon era), part-thriller (Sherlock and Watson -style), part-comedy. What has become known as K-pop is now all the rage: Is there anybody on planet Earth who is not familiar with the the catchy tune of Park Jae-san "Psy" 's Gangnam Style? The song takes its name from the trendy Gangnam neighborhood, south of the Han River where yours truly stayed at the Sheraton (loved the beautiful Joseon-era chests of drawers on display on every floor.)

Language
Although Korean script is traditionally based on Chinese ("Hanja" script) , the most common script ("Hangul") is alphabet-based  with characters representing vowels and consonants, and written left to right. Many Koreans write in mixed script, meaning that your global HRIS will need to cater to both.  Note that "Korea" is the Western name: Koreans refer to their country by a different name, which itself differs whether you are in the North or the South. Land of the Morning Calm is an old nickname for the country. 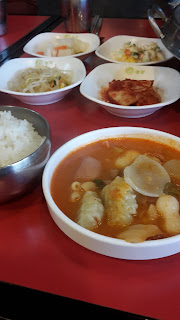 Unlike the Japanese and Chinese, Koreans love their cuisine quite spicy with side dish kimchee having pride of place at any Korean meal. I was surprised when I visited a friend to see that most Korean apartments come with a kimchee fridge, specially designed to ensure the delicacy is kept in optimal temperature. The coffee addict that I am was more than exhilarated to discover the pervasive café culture. I am hardly exaggerating when I say that at every other street you cross in Seoul, you'll find a coffee place, most belonging to Korean franchises with names such as A Twosome Place, Angel in Us Coffee (sic), Tous les Jours, Paris Baguette, Hollys Coffee, Tom N Toms coffee (I cringe at the missing apostrophe for the latter two).

Overall, I enjoyed my Korean experience tremendously (pace the dreadful traffic jams.) I would gladly come back, hopefully flying airline other than Korea Air: Despite the constant bowing by the pretty all-female crew, I found the experience quite underwhelming. The business class on the Airbus A380 is inferior to the one on Air France and, of course, nothing to be compared with best-in-class Emirates.


NOTE: All pictures taken by the consultant/blogger and remain the property of Ahmed Limam who is hereby asserting his copyright.

(This is the latest in a series of wide-ranging articles focusing on a single country. Previous posts: