Mourning the passing away of a unique political leader: Nelson Mandela, 1918-2013 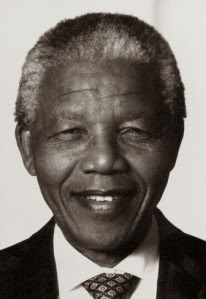 I was 26 years old when Nelson Mandela was freed . I will never forget that day. I was living in the United States then and, watching the news on TV, I was shocked when I realized that he had entered jail before I was born, meaning that he had spent an entire life, a generation, behind bars. And why? Just because of his principles, mainly that all human beings are equal.

In a world ruled by corrupt, incompetent, rotten and often illegitimate rulers, Mandela stood apart: a political leader motivated only by his people's interests, with zero ambition for himself. This was made  even more obvious when, at the height of his popularity, basking in his people's and the world's adoration, he refused to seek a second term and retired.

For his funeral world leaders will congregate to praise the great man. How hypocritical that neither Obama, Putin, Hollande, Cameron, and certainly not Mugabe, will follow his example but will continue to serve only themselves and their corporate and banking friends with total disregard for their citizens.

Goodbye, Madiba. The world was made a better place by your presence. It is made worse by your absence.

It will take generations, if not centuries, for a man of your caliber to appear amongst us.