Hell on Earth: How mankind will be wiped out 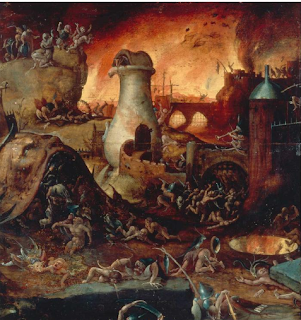 Flying from Barcelona, I landed in Paris  at 4 pm last Thursday, on time to be apprised that the city I've known since my birth had broken a record: 42°C. Half an hour later this record was itself broken when we reached 42.6°C. France’s crumbling infrastructure was in full display on the RER line linking the two city airports as service was interrupted for several hours, and when it resumed the absence of air conditioning and Saharan temperatures meant several people fainted.

A taste of things to come.

Like most, I always wondered how civilization would come to its end.

You read it here first.This is how mankind will be wiped out: steadily rising temperatures until life becomes untenable on Earth. Our only hope is to find another planet we can move to and screw up in turn.

Hopefully, by then I would have "shuffled off this mortal coil", to quote the immortal Bard's words.

Carpe planetam, one feels like adding. While it lasts.


The blogger is a great admirer of Hieronymus Bosch, whose works in Madrid's Prado Museum have delighted him for the past three decades