Curse of Spanish Monarchs: Never to die on the throne 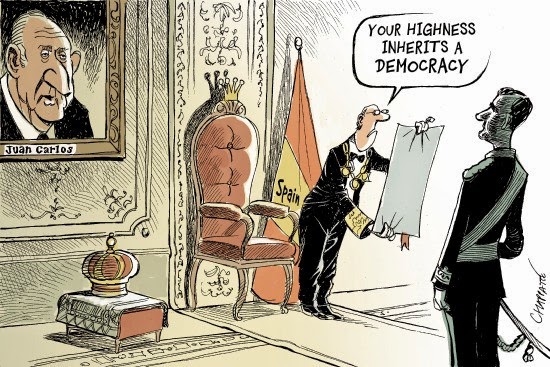 It was from this rebellious and republican city that, two weeks ago, I heard the momentous news. I had just landed at Barcelona's splendid airport (the only one I know that boasts an outdoor section in the transit area, thus allowing you to breathe fresh air and bask in the  sun) and hailed a taxi to take me to my hotel. I had barely sat in the back seat when the taxi driver asked me, "¿Qué le parece?" (What do you think?)

"¿Qué me parece qué?" (What do I think about what?) I asked.
"La abdicación." (The abdication) was the curt answer.
"La abdicación, ¿de quién?" (Whose abdication?)
"Pues, ¡del Rey!" (Well, the King’s) the taxi driver replied before turning on the radio.

I was stunned. As I explained in my blog post "My 20-year affair with Spain" I have known only one Spanish monarch, Juan Carlos, and have always been a great admirer of what he had achieved for his country (Note: I am NOT a royalist, read my April 2011 blog post "Abolish the monarchy or reinvent it"). Sure, the last few years have been quite difficult, in no small part due to the economic crisis which had triggered a popularity loss for all political institutions in the Western world (never high in the first place, anyway) and it wasn't so inconceivable that the great man would bow out. But still, once it happened, it was quite a shock, even in independence-minded Catalonia.

As fate would have it, I find myself back in the same city just a few days before the coronation of Felipe VI. A lot has been written in the press and commented on TV and in the blog sphere, in Spanish and English, about the meaning and consequences of the abdication, but I haven't seen any historical perspective on the topic, namely that unlike British or even former French monarchs, Spanish ones have a long tradition of losing their crowns.

The first Bourbon king, Philip V*, who came to the throne in the early 18th century, abdicated in favor of his son only to climb back to the throne a month later when the new king died unexpectedly. If you want to go back even further, the first king of a united Spain, the legendary Emperor Charles V, the most powerful monarch in his time, ruling over most of the Americas and a good third of Europe, voluntarily renounced his throne in the mid 1500s and finished his days in a remote monastery in western Spain.

But let's just go back two centuries. The early 18th century saw Charles IV** deposed by Napoleon who, ever the family man, put his brother Joseph on the Spanish throne. With Napoleon himself deposed in 1815, brother Joe (known to Spaniards as Pepe Botella*** for being too partial to alcohol) was removed and the Bourbon dynasty was restored with Charles's son, Ferdinand VII, on the throne. Ferdinand lost his job twice but managed to die with his crown on. His daughter and successor, Isabella II, didn't fare any better. After 30 years on the throne she was overthrown; and so disgusted was the country with the Bourbon dynasty that they plucked an Italian prince to come over and become their new sovereign.

Barely three years into his reign, Amadeo was forced to abdicate and pave the way for the First Spanish Republic which didn't last more than a couple of a years (interestingly, the first  two presidents were both Catalan) and in 1875 the monarchy was restored not with Isabella, who remained in exile, but with her son, Alfonso XII. Young Alfonso was to be the only Spanish king in both the 19th and 20th centuries not to abdicate or be deposed. However, his succession was far from assured since it was one of those rare cases where, upon his death, it was impossible to announce, "The King is Dead! Long Live the King!" The reason? Alfonso had no children; but his wife, Maria Cristina, was pregnant. So Spain had to wait until she was delivered of a baby to know whether they had a posthumous king or queen; it was a son, who became on his birth King Alfonso XIII.

Alfonso 's reign was an utter disaster: it started with the American-Spanish War of 1898 when Spain lost all its remaining colonial possessions. In 1931, Alfonso XIII (current King Juan Carlos' grandfather) lost the rest of his kingdom when he fled the country and  the Second Spanish Republic was established . Worse was to come with an early version of the Syrian conflict, the Spanish Civil War (another similarity with the Syrian situation was that many foreign fighters rushed to Spain to fight for the Republic).

Alfonso died in exile, just like his grandmother Isabella, and his son Juan (who carried the title of Count of this city where  a major avenue bears his name) never ruled because dictator Franco wouldn't relinquish power in his favor. For reasons only known to the Generalisimo (or Caudillo as he was also called), he decided that upon his death Juan Carlos, Juan's son,  would succeed him, thus restoring the monarchy in 1975.

With King Juan Carlos following in the family tradition of regnum interruptum, if I may coin the phrase, it is a fair question to wonder whether his son's won't be an even shorter reign, maybe the last one of a long line of monarchs. He is already off to bad start, through no fault of his, though: with Spain, the ruling world soccer champions, having lost humiliatingly their first World Cup game to Holland 5-1 two days ago, many Spaniards are equating Felipe VI= V-I and wondering if worse disasters are yet to come. But Spanish kings have an uncanny knack for survival: after all the  civil wars, rebellions, foreign invasions, forced abdications and other  upheavals, they have managed to transfer the crown from grandparent/parent to child/grandchild for 1,000 years within one single family line. ****

*Apart from the current monarchs, I am using for the historical ones the English names under which they are know, thus "Charles" for "Carlos" and "Philip" for "Felipe".

**No mistake in the numbering. Although belonging to the same dynasty, the Hapsburgs (known in Spain as the "Austrias"), Charles IV did come after Charles V. The reason? Charles V was also Holy Roman (that is, German) Emperor and the number  "V" was his number as Emperor. As Spanish king, he was Charles I; but even in Spain he is widely referred to as Charles V, as evidenced by the roundabout in Madrid known as Glorieta del Emperador Carlos V.

***Pepe is Spanish for Joe and botella for bottle. No relation to Madrid's current mayor, Ana Botella.

****Even when the dynasty name changes, because of a female marrying outside the dynasty, it is still the same family. Thus, the first Bourbon king (Philip V)was also the grandson of the last Hapsburg king (Charles II) through his daughter Maria Teresa who had married the famous French King Louis XIV. The three houses of Trastamara, Aragon and Hapsburg, who ruled in succession in the late Middle Ages/early Renaissance, were actually a grandmother (Isabella the Catholic), daughter (Joanna the Mad) and grandson (the aforementioned Emperor Charles V.)