Bereft of actresses and heroines, a sadder, poorer world awaits us 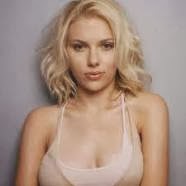 An article in this week's edition of The Economist made me hit the roof. The famous British weekly referred to Scarlett Johansson (pictured here) as a "Hollywood actor." I don't know this person intimately but I have seen her in enough movies to state with quite some confidence that she is a woman. In that case she should be referred to as a "Hollywood actress", right?

21st-century, post-modern Anglo-Saxon society, especially the American variety, is driving politically correctness (PC) to absurd levels. For the sake of sexual equality we are asked now to erase all signs of sexual differences, even in language. This is crazy. As there are boys and girls, cows and oxen, roosters and hens, so are there actors and actresses. What is wrong with that?

Gender-equality advocates, the looniest of PC freaks, make the case that here we are referring to positions or roles, and a position can be held by either a man or woman, therefore there should be just a single word for it. Otherwise we would be perpetuating the notion that some roles are still confined to a sex.

This approach is simply wrong for various reasons.

First, English is already largely a gender-neutral language. Player, director, dancer, executive etc. are used equally to refer to a man or woman in that role. This is the result of the language's natural evolution and gender-equality proponents should therefore be happy enough and shut up.

Second, why don't English speakers come out of their self-centeredness and check what is happening in other cultures and languages? Whether Arabic, German or Latin languages, over one billion people have a masculine and a feminine for all these roles. Actually, Latin languages such as French, Spanish and Portuguese have gone the other way to further equality between the sexes: they are insisting that a word which traditionally only existed in the masculine form (French "Président" and Spanish/Portuguese "Presidente") now have a feminine as well since a woman can also hold the position of "President". We now have "Présidente" and "Presidenta", although there are still organizations that refuse to use the term (the French Academy, a refuge of old farts disconnected from everyday life, still insist that a woman elected to the highest office in the land  be called, absurdly "Madame LE Président") and Brazil's most read daily O Globo refers to Dilma Roussef as "Presidente" - check  my blog post on this topic). Sure, there are some languages such as Turkish which don't distinguish between the masculine and feminine genders, but English is not one of them, so why force-engineer a linguistic change which, let's face it, is not going to change facts on  the ground per se? It can't have escaped you that several Latin and Muslim countries have already had female presidents while the US is still waiting for one.

Third, PC freaks are so obsessed with their nutty crusade that they don't realize that their proposal for gender equality perpetuates the old male-dominated system when they insist that the masculine term should be the neutral one. If we wanted true equality, then we should say, "OK, from now on only one word for both. For words X, Y & Z it will be the masculine one; for words A, B & C it will be the feminine one." But no, they want everybody to become actors and heroes. If a woman can be referred to as an "actor" then why can't a man be referred to as a "heroine"?

Fourth, common sense has been completely lost in this fight. If  "ambassadress" has all but disappeared and "Jewess" is no longer used (which it was as some terms naturally become obsolete), "director" has always been the only form  for both male and female holders of that titles: are we going to rewrite history and refer to Russia's Catherine the Great as "The Emperor Catherine"? Should Elizabeth II, a monarch in her own right, insist that, for equality's sake, she now be known as King Elizabeth ? Most people would agreed that is absurd, and yet if gender-equality advocates value consistency they should propose this.

By the way, I have nothing against feminists. On the contrary. I believe that women (among other groups) have been historically discriminated against and that should stop. Yes, I believe in women's rights but also in the right of language to evolve naturally and not become deformed based on any lunatic group's ideals .

Can we come back to our senses? There are many more serious issues in this world (global warming, wars, drought, hunger, Aids etc.) Can we focus our energy on these and not waste our time on preposterous fights? We would do everybody, including good-prose lovers, a great favor.