The unbearable dullness of the Academy Awards 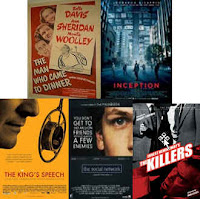 RIO DE JANEIRO
One of life's greatest mysteries is how come that Hollywood, which churns out some of the best entertainment for the world to consume, consistently fails with the annual Academy Awards presentation. The show is a long, tedious, boring affair that drags on for hours. I stopped watching it in the last millennium as I could think of other "pleasures" to inflict on myself, for example corporate PowerPoint presentations (which unfortunately come minus the glamour of Tinseltown.)  News reports keep apprising me of how right my decision was, with last week's presentation no marked enhancement on the usual fare.

To make matters worse, the winners are often largely undeserving with some choices utterly puzzling, so we cannot even give the Academy the mitigating circumstance of having picked the truly best, to make up for the horrid show.  The prizes (also known as Oscars), awarded by the somewhat grandiosely styled Academy of Motion Picture Arts and Sciences, aim at honoring "outstanding achievement in filmmaking" as its mission statement says. Well, as you could tell from last year's two main contenders (dreadful Avatar and pointless The Hurt Locker) "outstanding" is not exactly the word that comes to mind. In the runup to the Oscars last week I watched some of the most nominated movies and candidate for top honors.


Christopher Nolan’s Inception was interesting, even intriguing  in its major concept: can we control people’s minds through their dreams? What about interferences by people’s projections, fantasies and traumas? And dreams within a dream? This attractive idea is served well by impressive sound and visual special effects but in the end it fails to deliver as it is basically all a pretext to just one action stunt after another. Disappointing.


The same adjective applies to The King’s Speech, the winner for Best Picture, Director, Actor and Original Screenplay. The British movie clearly tries to capitalize on the Queen precedent: take royalty, the British variety never ceasing to fascinate, mix the big historical events with an intimate look at the players and you have a crowd pleaser. What was astonishing in The Queen because never done before (along with a brilliant script, assured direction and first-rate performance by Helen Mirren) becomes a bit déjà vu here.  Or, to be more accurate, déjà entendu when you hear hackneyed lines such as “These doctors are idiots” – “But they’ve been knighted” – “Which makes it official.” Or “It’s Ma’am as in palm not as in ham” (actually used in The Queen), the marbles trick used in My Fair Lady etc. The  desire to humanize the royals at times is absurd: who would believe that the Duchess of York would go on her own to visit a doctor or that she tucks her daughters in bed without the help of a nanny. I almost expected her to start fixing scrambled eggs for her husband in the morning.


Now, I know that films, even based on true events, don't have to be a copycat version of reality, but at least they should have some credibility to them. Who would believe that the father of the Queen of England played the penguin (especially when seeing how stuck up she turned out to be) or that he would use a full range of expletives such as the F word? The latter apart, everything about the four- member Royal Family seems to come straight  from a Disney movie (did they produce it?- I checked and the answer is no.) Again such a stark difference with The Queen, which showed that you can express admiration for the monarch while being critical. Sorry, although The King’s Speech is a well made, amiable movie with fine performances, The Queen was definitely a superior movie and this is just another example of the Academy's famous failures at recognizing great cinematic achievement. (It also clear that after Charles Laughton in The Life of Henry VIII in the 1930's, Katharine Hepburn as Eleanor of Aquitaine in the 1960's, Judy Dench as Elizabeth I  and Helen Mirren as her 20th century namesake and successor, playing a British monarch gives you a leg up over your Oscar competition.)


The Social Network, another of the major nominees, with a great storyline (sorry for my lack of modesty, but the way they depicted Facebook's founder was very similar to the Silicon Valley CEO I describe in my book, High-Tech Planet). The dialogue at the beginning was quite brilliant and I felt it was a better movie than The King's Speech and therefore should have won.


Actually the best movie-watching experience of these past weeks turned out to be neither of these three but two excellent productions from the 1940's and  which I had never seen before.  The first one is a 1946 film noir by Richard Siodmak: The Killers, starring Burt Lancaster in his first role and a dazzlingly beautiful Ava Gardner, truly one of the most beautiful animals to have graced the silver screen. Based on a short story by Hemingway, which must have been substantially adapted as I always found the great man a powerful bore, it has all the ingredients of the genre: femme fatale, crime, corruption and unexpected ending, all woven together brilliantly. The other one, The Man Who Came to Dinner, a delightful comedy with Bette Davis in a  surprisingly smaller role than usual, was made in 1941, an amazing 70 years ago, and is more enjoyable than most of last year's productions.


These two movies are proof again that only a handful of movies  a year are worth spending time on and that if you want quality cinema, then go back to the oldies. As I always tell whomever cares to listen, it is much more satisfying to see a great old film than a mediocre new one. 2010, like 2009 before it, will not remain as a vintage celluloid year.


(Now I can go back to Carnival revelries, today being Mardi Gras is the last day of the annual Rio bacchanalia.)