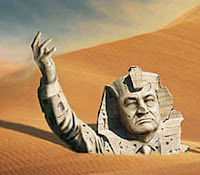 BOGOTA
Even from the other side of the world there is no escaping the momentous news, which explains why for the second time in a row I am posting on political developments in the Arab world. Last time, a month ago, when I wrote on the  Tunisian uprising which ended the dictatorial rule of Ben Ali, I predicted that Egypt, the heart of the Arab world, would be next. Last Thursday I emailed an old friend of mine: "This is the end of the game for Mubarak.  Following his refusal to leave power, the Egyptian people will mount an even bigger rally and protests after Friday prayers in now world-famous aptly named Liberation Square  and there is no way the military will allow him to stay. So by next week, and maybe even this weekend, he'll be gone." I was gratified to see I was right: the next day, as the weekend started, Hosni Mubarak, the last pharaoh, the absolute ruler of 80 million Egyptians for 30 decades, resigned in ignominy and fled to his home in the Red Sea resort of Sharm-al-Sheikh probably on his way to Saudi Arabia where, like an elephant cemetery, dictators retire to die.

What does this purport for the region, the world and US foreign policy? Well, much has been written, said, pontificated, hollered about by more knowledgeable people than I, so I don't need to expostulate at length. I would just like to lay to rest some myths.

Myth # 1. A lot is being said about the respect in which the Egyptian armed forces (which are taking over  during a transition period) are held. Well, if respect it is, it is the respect spawned by fear, not admiration. What is respectable or admirable about the Egyptian army? Abroad, they waged war against Israel three times, and were defeated three times. At home, they have been the backbone of the dictatorship for decades. Mubarak himself was a general, as have been all Egyptian presidents since the military (yes, they again) overthrew the monarchy in 1952 in what was a coup and not a popular uprising. How ironic that they got rid of King Farouk because he was too subservient to British interests (the power of the day) and they ended up just doing America's bidding.

Myth # 2: Don't believe a single word of all the lofty talk of Obama and Clinton about "the voice of the Egyptian people". Until this week they were backing newly appointed Vice-President Oman Suleyman to take over a vaguely defined transition. But Suleyman is as bad as Mubarak: as head of the intelligence services he has overseen every repressive policy of the last decades including torture, brutal crackdown, censorship, arbitrary arrests, rigged elections and stifling dissent. How can that be a change? Well, it isn't, and that's what America was/is after: to keep the same regime in place under a veneer of pseudo-democracy so that it can continue to implement America's policies in the region. But Vox populi, vox dei. Sometimes you just can't go against the people when they rise in their millions.


Myth #3: The free and responsible media. Yeah, right! I was mesmerized by CNN's coverage  which turned shrilly anti-Mubarak referring to him as the dictator at the height of the protests. And yet for decades you never heard anything like that. Had the Egyptian people not risen against the oppressive regime, CNN would have been glad to continue reporting on "Egyptian elections won by the president's party" and leave it at that when it was obvious that last November's elections had been rigged beyond belief. But that didn't seem to bother CNN unduly nor the US government who was quite happy as long as their buddy stayed in power. It was mind-boggling to hear US Vice-President Joe Biden refer to Mubarak as "not a dictator" and this ...as recently as two weeks ago when he was sending his armed thugs against peaceful demonstrators. Just like French minister Frédéric Mitterand protesting on TV channel Canal+ Sunday program that "Ben Ali is not a dictator" when his police was shooting his own people, and five days before he was to flee. The hypocrisy and duplicity of both mainstream media and politicians are seemingly endless. (Do I need to remind my readers about the New York Times endorsing Bush's Iraq war?)


Myth # 4: The Arabs are happy with their lot and never rise up. True, the last major Arab uprising was almost a century ago, in 1916 when they rose against their Turkish overlords in what was to be known as the Arab Revolt (with the help of legendary Lawrence of Arabia) and would lead to the creation of the modern Arab states that we know today and which are in deep crisis. Tunisia then showed the way and the Egyptians were so shamed by this little country to have done what they hadn't dared do that it galvanized them into taking their fate into their own hands. After all, don't Cairenes call their city Umm-ad-Dunia, center of the world? How could they fail where a small Arab country succeeded, they the heart of the Arab world, its most populous country?


Three more points are worth mentioning:

- Technology and especially social media were instrumental in mobilizing protesters and getting the word and pictures out. When Zuckerberg created Facebook in his dorm room several years ago I guess that if he never suspected it would quickly be worth billions of dollars, it is a safe bet to say that it never crossed his mind that it would have such political impact in countries on the other side of the globe. In the tug between the immovable object represented by Mubarak and the Egyptian protesters' irresistible force the latter won because it has Facebook on its side.


- US foreign policy in the region is in complete disarray. It tried under Bush to foment democracy (or so it pretended) for nothing. So when Obama came to power he soon went realpolitik accepting Arab autocrats (but then did he really ever want that to change?) and, bang, Arab democracy explodes in his face. It is too early to make a definite judgment, but I believe that the maturity and commitment of the Egyptian people have shown that they will not accept anything less than a free society and democratically elected leaders. And representative government in Egypt means that US policy (especially as regards Israel) will never be the same, because "Egypt will never be the same again" in Obama's words.

- So, who's next? As (bad) luck would have it, the longest ruling dictator in the Arab world, buffoon Qaddafi (he came to power two months after Armstrong walked on the moon, that is 42 long years ago) just happens to be wedged between Tunisia and Egypt, the two countries  which have just chucked their dictators. You can bet that the Libyan dictator is not getting much sleep these days. And today Mahmoud Abbas, the Palestinian president, announced presidential and legislative elections for next September. Considering that his term ended in January 2009 and he decided to stay on without bothering to ask his people how they felt about it, not too soon you might think. And yet CNN has yet to call him a dictator nor does the US administration criticize him for not being elected. Algeria is another low-hanging fruit with its explosive mixture of emergency laws, repressive gerontocratic single-party government and economic. The Saudi king who rules like a medieval monarch supported Mubarak to the hilt until his last moments in office understanding very well what it would mean for his family's shocking and continuing  control of a major and wealthy Arab country if Egypt went democratic. Another same-name Middle Eastern monarch, Jordan's Abdallah II, would be well advised to stop appointing the Prime Minister and leave it to elections to decide the makeup of a government. Of course, that means that the Palestinian majority in his country and probably the Islamists would come to power, something the US (as a sponsor of  Israel) would hate to happen. But isn't democracy about letting the people choose freely their leaders, whether you like them or not?


- A lesson for US foreign policy is to accept Islamist parties, realizing that (a) the US can't anymore force its will on the Arabs, an ancient and proud people (b) that just like not all Socialist governments in democratic Europe or Latin America mean rabidly anti-American policies, some Islamist parties such as the Muslim Brotherhood may well turn out to be people the US can do business with (along the lines of the AKP government in Turkey.) And remember, most of these opponents of the US became so only after the US engaged in anti-Arab policies. Be more friendly to the Arabs, and the Arabs will be friendly to you.


Finally, to close my thoughts on this truly remarkable and historical achievement, let me share with you  three jokes making the rounds in Cairo.


1. Why did it take Mubarak three decades to appoint a vice-president? − Because he couldn't find anybody as stupid a he is.


2. Where does the $1.5 billion in US military aid to Egypt go? − Half is spent on military equipment and half on black dye for Mubarak's hair.
3. As Pharaoh-Mummy Mubarak lies on his (political) deathbed, his counselors gather by and tell him: "Excellency, the Egyptian people are here to bid you farewell." − "Farewell?", the dying man says, "but where are they going?"