FRANFURT
Returning from my first Sapphire in years (working for several vendors such as PeopleSoft, Oracle and Fidelity in a row wasn't the best way to get me an invitation to the world's largest business-software event) I feel like sharing some thoughts about what could be a game-changer  for HR technology. My deepest apologies if I use a cliché (I positively hate those pompous and vacuous "paradign shifts" and "game-changing" when not "disruptive technologies") but for the first time since Workday introduced its object-oriented architecture here's a technology that could truly enhance HR systems.

Sure, Workday (a direct competitor to SAP's Business ByDesign whose latest version also premiered at the event) already uses in-memory technology (IMT) but the fact that SAP has a much larger installed base of HR customers has the potential to bring this new technology to the masses more effectively.

First, if you wonder what IMT is, here how it goes: until now you saved your data (salaries, employee details, list of positions to be filled etc.) into separate disks in a database (such as Oracle, IBM DB2, Sybase just bought by SAP, Microsoft SQL Server or Informix -also an IBM platform-  to name the best-known ones) where they were safe and secure. Of course, such data were useless unless you could retrieve them as part of your transactional work (processing a payroll, hiring an employee) or analyzing them for better informed decisions (getting a report on training costs, for instance.) The problem was that retrieving, transacting and analyzing data in this architecture took time: days, sometimes weeks, which was an improvement on a a paper-based manual process but still frustrating. Enterprise systems in general, and HCM suites in particular, have struggled with the issue for so long, especially in the analytics space, that they had to resort to acquiring best-of-breed systems to plug what was an embarassing gap in their offering: SAP bought BusinessObjects in 2007 followed shortly by Oracle's acquisition of Hyperion. Oracle's move came after the failure of its business intelligence offering. Human Resource Intelligence (HRI), Oracle's BI application for its HR product, was not exactly a blockbuster and for good reasons: it was not real-time, had to be refreshed daily and the pre-delivered graphs could not be customized. As for SAP and its myriad offerings, datawarehousing this and dashboarding that, the addition of BusinessObjects didn't make their offering any more real-time.

Now, with memory chips becoming cheaper, faster and more powerful, a greater number of them can be put in servers' short-term memory, rather than databases, where they can be retrieved and manipulated faster and more easily.   Real-time HR is just around the corner. Some practical applications in the HR space could include the following:

1. Payroll: after all is said and done about strategic HR/Talent Management/People Management and other vocables to describe the nobler aspects of HRM, payroll is still the cornestone of any HR system, probably more so in tough economic times. Most companies when selecting a payroll, especially in an on-premise mode, spend a lot of the evaluation time on response times and benchmarking the shortlisted vendors. For a company with, say, 10,000 employees running a payroll (process run, prepayments, check writing, costing, archiving) can take several hours depending on configuration and complexity of payroll (special elements, retro-pay just to name a few). Cut that in half and suddenly the dreariest of HR jobs becomes, well, not exactly the most glamorous one, but definitely less taxing. And imagine what you can do with payroll simulation, a key requirement when negotiating wage raises with unions. Having literally at your fingertips the actual cost of, say, 1% increase gives you not only great leverage but undisputed hard facts on which to base your decision. Here speed is of the essence.

2. What-if analysis and modeling (and not only for payrolls) have long been one of the weak links of HR applications requiring the use of non-live systems which added to the length and complexity of the decision-making   process: how can you make up your mind on the size of the bonus to award your highest performers if you have only a vague idea of what the impact on the bottom line is? 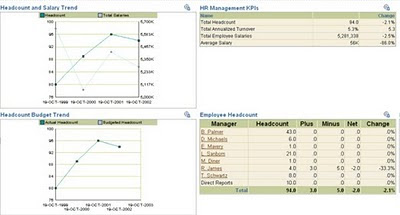 3. Intelligence and analytics: taking the former issue further, why should one have to run specific reports and simulations on what are humdrums issues? Wouldn't it be much more efficient to have configurable queries on several HR aspects (see above diagram with HR KPI's) in a push mode where you see the result at best every time you refresh your analyrics page (or dashboard), at worse at no more than a click? You can't do that when every query means  having to query the database, and I'm not even talking here of the highly technical skills needed.

4. Reporting: after payroll,  much of HR's dullest work is putting together the innumerable (and constantly increasing) list of reports required by business and demanded by government. With ITM, why bother about putting them together and storing them when they can be pieced together on the fly? Your report on mid-managerial employees in the northern region making $100,000 a year is not available or was never pre-built? No problem.  You can now have it faster than an ad hoc tool could ever have helped you, even faster than some already configured, standard reports delivered by your vendor. If this is not a revolution, I don't know what is.

The practical applications of IMT in the HR space are such that IMT is bound to deliver solid enhancements once the vendors get around how to market it. At Sapphire SAP was unsurprsingly mum on whether it would packaged with applications and/or the database and how it will be charged. But it is already clear that with this SAP has an edge over Oracle whose Larry Ellison ridiculed its nemesis and unsurprisngly so as he realizes that should IMT live up to its expectations his flagship database business could start declining, maybe even go the way of the dinosaurs. Small wonder that at the same time as Oracle is dismissing IMT it has quietly beefed up its offering  with what it calls IMT but is just a glorified cache applied to the database to speed up processing it time. Also important (but it wasn't mentioned by SAP at the conference - somebody clearly didn't do their research thoroughly, I surmise) is that from a competitive viewpoint IMT could damage Oracle who makes large use throughout its HRMS suite of so-called FastFormulas which are stored in the database. With IMT (or rather without since FastFormulas can't use it), the Oracle product (on whose code the next-generation Fusion HCM is being developed) will look decidedly dusty.

Whatever the respective competitive strengths of every vendor and their marketing tactics, and expect a deluge of hype as everybody jumps on the IMT bandwagon regardless of what they can really offer, one thing is clear: real-time HR is now for the first time about to become ...real.