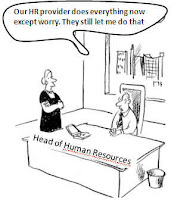 ATLANTA
They say that remarriage is the triumph of hope over experience. Something similar can be said about outsourcing corporate functions such as Finance or HR.  Why would you ask another company to take over your recruitment or your payroll, if you were happy with them in the first place?  And what are the chances that this HR outsourcing (HRO) provider would be more successful than your own folks who, after all, are located physically within the walls of your company as well as know its culture, and over whom you have stronger control as employees than over a vendor?


The rationale for outsourcing , and which has made it grow over the past decades (even if taking into account the slowdown of the last couple of years) is well known:  it can bring about substantial cost reductions while at least maintaining the same quality level (the famous “your mess for less”) thus allowing management to focus on its core business without the distraction of overseeing other departments, their workforce or the IT systems that underpin the corporate processes that are being outsourced.  More recently, however, access to expertise and innovation have become key reasons for companies to go down the outsourcing road.

But is this faith in their HRO provider’s ability to provide access to innovation, especially when IT-based,  warranted? To provide an answer we have to distinguish between the "old" or "all-or-nothing" outsourcing and the "new" or "à la carte" outsourcing.

"All-or-nothing" (or traditional) outsourcing refers to the first HR functions to be historically outsourced, usually payroll and benefits where all the tasks from from data entry to process running to reports are managed by the vendor. In this case most of the IT innovation is done behind the scenes with the customer rarely aware of how innovative the proprietary systems are. And to a large extent why should they care? As long as the gross-to-net is calculated correctly and payslips and deposits are produced on time, the existence of  innovative tools is largely immaterial to end users. What if the payroll software does not have a wizard and makes the creation of earnings and deductions a nightmare? Well, since payroll processing is the provider's responsibility and a customer's contact with the system is limited to the few times a month when HR data (compensation, new hires, absences, benefit enrollment) are updated and sent from the master HR system to the vendor's payroll there is no reason for the client to worry about how innovative such a tool is, unless employees find the self service transaction to check their payslip online so horrid that it works as a disincentive - something extremely rare.

Things are quite different with the new forms of outsourcing (what I'd call "à la carte outsourcing") where, with the HR function moving more into strategic HR or talent management, the system  (a) touches on many or all of your  employees  but also (b) in a quasi-permanent fashion.  A recruitment tool may not be used much by HR (since it’s outsourced ) but it will be used extensively by hiring managers ( admittedly a minority within your employees) AND,  since applicants can come from inside as well as outside the company, then everybody in the company becomes a user of the system.  And since one can update one’s skills or apply for a new position at any moment, then the system is on permanent use by most or all employees even if the process is managed by an outsourcing provider.

In the case of HR/talent management, where usage frequency and number of users touched by the system can be more important, as well as the fact that those are functions not systematically outsourced, the traditional HRO providers have scrambled to come up with a new offering, usually through acquisitions. Thus ADP, the industry's behemoth, has embarked on a shopping spree aimed at plugging the various holes in its HR offering such as recruitment with VirtualEdge or compensation with Workscape, about which I wrote a post last summer. If Workscape is considered as one of the best compensation tools (especially in the US), it is still unclear what value the integration with ADP's other products brings. And Workscape's performance management was simply ignored in favor of the Cornerstone OnDemand partnership: if ADP prefers to resell a partner's product rather than its own, then don't expect much innovation to come from it. As for VirtualEdge, it was never considered a star product and since its acquisition it seems to have become a Cinderella application. Little innovation is therefore expected to come from it either.

The Indian giants (Wipro, Infosys, TCS and new kid on the block Genpact) are just happy to use whatever platform their customers have and so far have not developed or acquired any other system of their own. Accenture and IBM use a similar approach enriched with strategic consulting and reengineering, but do not innovate on the technology front since they, too, use standard package tools. Actually IBM even got out of the HR software market when it sold HR Access to Fidelity which, after almost a decade with it, has yet to deliver cutting-edge HR technology whether as an outsourcing provider or a software vendor (you can read here my post last year on Fidelity and its HR services.)

NorthgateArinso (NGA), the challenger for the HRO leader's spot, has also gone down the acquisition road. Based on their record they are as much of a serial acquirer as ADP, but most of the HR software companies they have bought have joined their software portfolio more for their country-specific functionality than for their  HR-rich content. However, another evolution of their offering, SAP-based euHReka, is a different story. Here NGA has  innovated by enhancing the SAP product quite substantially with context-and role-based actions and by reducing the number of screens, something that customers used to the cluttered SAP screens and poor navigation can only appreciate. (A client once complained to me that to create an employee in SAP they had to go through an amazing 12 screens!) Sure, some of the enhancement have been for the vendor's own benefit rather than the customer's (such as multi-tenanting SAP so as to be able to run several customers on a single instance), but the creation of an additional user layer which has brought much improved self-service capability has turned the SAP product into a more user friendly system, something it had never been accused of before. Sure, this is not on a par with the usability excellence of a Sonar6, or even of a Workday, but those SAP customers who have upgraded from their own SAP implementation to  euHReka have definitely gained from it.


Unfortunately this latter example is a rare one: outsourcing providers seem to be happy to buy software vendors (when they do) just for the customer base and to be able to tell their own customer, "Hey, look, we too have a talent management offering" (even if limited in depth and breadth) rather than to foster truly innovative features. Don't expect the next revolutionary social HR,  mobile HR or user interface to come from these quarters. Maybe that an outsourcing company is too different a business to understand how to make software, even if they had been using some since Day 1.


To be fair to the vendors, one must point out that many customers do not have particularly innovative HR practices to start with (many of them wouldn't have gone down the BPO road in the first place if they had) and therefore don't pressure their vendor to be more innovative. But for those forward-looking and -thinking companies, and which have't been burned out by experience, hope for innovation may well lead them to a third marriage with another provider. Let's wish them "third time lucky".


(The blogger was in Atlanta attending the Analyst and Advisor Summit held by Northgate Arinso. It was also the blogger’s 20th anniversary of his graduation from the nearby University of Georgia.)

AHMED LIMAM
A global business and HR technology expert, I live mainly in Paris,France where I was born, after stints in North Africa, the US (where I went to college), Spain (where I worked for the UN) and Brazil (where I spent my early freelance years) along with countless other countries around the globe. A strong believer in the dual role of HR and cloud technology to enhance corporate performance, these convictions are voiced in journal articles, at conferences and in blog posts. I am also the proud author of "High-Tech Planet", a rare business novel set in the IT industry (available from Amazon: http://amzn.to/czf0qw.) A relentless globe-trotter I am fluent in 6 languages. To quote Charlemagne: "to have a second language is to have a second soul." I also NEVER TAKE THINGS AT THEIR FACE VALUE. Challenge the received wisdom and go beyond first impressions: you'll be amply rewarded - that's my philosophy. I can be reached at: contact@AhmedLimam.com. NOTE: The thoughts expressed in this blog reflect my personal views, not those of any company I am or have been associated with.