Can software dinosaurs reinvent themselves as cloud-based vendors? 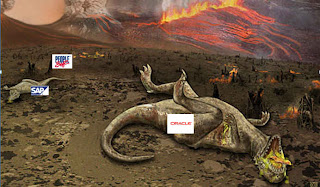 PARIS
Lou Gerstner, IBM's legendary CEO, famously claimed that "elephants can dance" when describing his amazing success at turning Big Blue from a hardware-cum-software company into a services group. This feat is, however, quite unique and cannot be easily replicated. In a recent Linkedin discussion of the HR Technology group, claims were made that traditional software vendors such as SAP or Oracle can turn their offering from on-premise systems (ERP) to web-based ones, also known by the acronym SaaS.

First, let's get the issue of terminology and acronyms out of the way. I've always hated the ERP term, so  typical of the IT industry to throw unintelligible acronyms at every technological innovation. Most laymen would just stare at you blankly if you told them they needed an Enteprise Resource Planning to manage their business functions in an integrated way. Why not call it Integrated Business System (IBS)? Wouldn't this letter combination be as good as any, with the added advantage of actually meaning something? (The rational French translate ERP as PGI- Progiciel de Gestion Intégré or Integrated Management System) Now that a new IT model is taking root, guess what? We need a new, incomprehensible acronym to befuddle people even more. And thus was SaaS born to refer to software that instead of being installed in your own computers within your company's walls, is accessed to, and your data saved, online (just like Hotmail versus Outlook.)  But why call it Software-as-a-Service, when web-based or online software does the job as adequately and more meaningfully?  But the IT industry wouldn't be what it is if it spoke in plain English. Maybe we are subliminally implying that the older, on-premise systems were software-as-a disservice? In which case it would make sense to me. (According to another buzzword and misnomer, often used in conjunction with SaaS, these applications are supposed to reside in a somewhat magical world called The Cloud. Nothing could be further from the truth as these applications are dished out by servers parked in data centers grounded on terra firma.)

With this off my chest, let us get back to whether the traditional software vendors (or dinosaurs to remain with an animal-kingdom image) can reinvent themselves by embracing this brave new world of SaaS. The first question that many people will ask is whether that is an issue at all. Surely, there will always be companies that would rather own their HR system (or other business software) than rent it, won't there? Well, if you look at the evolution of IT, not really. Why bother having huge inhouse data centers with legions of IT specialists when you can have somebody else bother about it and you just pay as you use it, like a utility? Actually the comparison with utilities is spot on. When electric power came about, most companies had their own generators. But when power transmission prices came down it was easier to be far from the source and then companies realized they could sell their surplus power to other companies. From then on it was a short hop for specialist companies to produce and distribute power. Who now in their right mind would want to have their own power generator?

Some defenders of the software ancien régime will press the point that with your own product installed within your company's walls you can customize it to your heart's content, something you can't do with a web-based application. Let me remind you that (just like with electric power) initially companies built their own business applications before realizing it was more cost-effective to buy it from a software vendor. The buy-vs.build debate was won by the package-software firms who won the resistance of the home-made lobby who led a rearguard battle to keep IT inhouse as the only guarantee that "all our requirements can be met."

The arrival of SaaS heralds another sea change in IT summarized by the phrase I used in the earlier paragraph: "Why buy it if you can rent it?" Configuration capabilities will win over customization defenders. And even if the traditional-software vendors, as befits an incumbent industry, still make out the lion's share of the business-application market, the trend is unmistakable: a growing number of HR system projects are now implemented through a SaaS model. The minority is soon going to be a majority. The question is therefore no longer whether old software companies should or want to test SaaS waters , but whether they are capable of doing so with a modicum of success.

In the Linkedin discussion I alluded to in the opening paragraph, it was claimed that the flagship product of one such dinosaur, Oracle EBS, in its release 12 variety had morphed into a full multi-tenant product. For you laymen, a multi-tenant system is one where many different companies can be managed in a single instance of the system, something that traditional software vendors never bothered to do since they sold their products to a single customer. However, now that consumers (of the corporate variety or not)  do NOT want to own the system, but are happy to access it online, it becomes vital to be able to provide it to many users at once. This issue of multi-tenancy actually predates the rise of SaaS since to be able to provide outsourcing services on traditional ERP systems (oops, sorry, integrated management systems) required such a feature and yet Oracle never managed to develop it until now. But has it?

To add to my list of bestial metaphors, can a zebra really shed its stripes? Can an old dog learn new tricks? I doubt it. Oracle's DNA was in the database business which explains why it never managed to become the leader in the applications business  thus obliging it to resort to buying the leaders in the various business software spaces (PeopleSoft in HR, Siebel in CRM/marketing, Hyperion in analytics.) But even there it remains a traditional, on-premise vendor. As Naomi Bloom, our grande dame of HR software, quite rightly said, no amount of functional enhancements can change that fact. The SaaS business is radically different from the traditional software one. Let's consider the just two points:

1. Even if Oracle has managed to add an extra layer in EBS 12 to allow storing data across several companies, that doesn't make it true multi-tenant. What about cross-customer processes? Can Oracle EBS truly launch a single payroll process for several customers at once? Produce reports? So far, the only ERP partner that has had some success in multi-tenanting  an old system is NorthgateArinso with their SAP-based platform, euHReka. (All outsourcers who did not build their own platform are struggling with this issue, from Fidelity to the big Indian  BPO powerhouses.)

2. Even if Oracle were to truly multi-tenant its offering (a big if, knowing that most of their R&D resources are focused on Fusion), there is more to SaaS than just a multi-tenant model. The existence of multiple versions, for one thing, precludes it being considered as a true SaaS offering.


If you look at the emergence of SaaS vendors, all have been products that were designed from the start as such (Workday, Salesforce etc.) Jurassic vendors such as SAP and Oracle are not nimble enough in their business models and product architecture to reinvent themselves as true SaaS vendors. There is a reason, after all, why dinosaurs who once roamed our planet as its undisputed masters disappeared: they share many traits with these old software vendors - big strong bullies who couldn't adapt and had to make way for humans, a much smaller species. Our software dinosaurs can tweak their systems any way  they want, it will not make them a true SaaS offering. It is more likely to end up as a turkey since it will be nothing more than lipstick on a pig- and I shall stop this software bestiary at this last four-legged image.