When "My Big Fat Greek Wedding" becomes a Greek tragedy 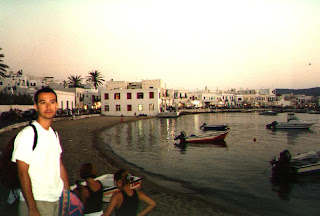 PARIS
So now it's all about wicked speculators trying to destroy a small and virtuous country. At least that's the message that Greek Prime Minister Papandreou has been hammering these last days in his mini-world tour aiming at finding a solution to his country's financial travails. Excuse me, but there's nothing illegal about speculating, otherwise said speculators would already be in jail. Speculators stand to lose their shirts in their high-risk operations and, yes, this is how it works in a capitalist system: they also stand to make big bucks. But they only do so in exceptional circumstances such as a war or a particularly badly managed economy which is the case with Greece. After all, Greece does have a high budget deficit (12% and counting) and speculators had nothing to do with it. It's irresponsible Greek governments who, also adding accounting fraud to such skills, have driven the country to such dire straits. (By the way did you know that for the most part of the past 60 years the Hellenes have been run by either a Papandreou or a Constantinis? difficult to shirk your responsibilities then.)

Of course, both Merkel and Sarkozy professed they wouldn't let Greece down but at the same time the Germans have ruled out any bailout and sensibly so: why should a Teutonic taxpayer subsidize a Greek's pension or holidays? As for Sarkozy, his gesticulations are on a par with his usual behavior: they are aimed at self-aggrandizement ("Sarko the savior of the Eurozone") but also self-interest. He knows that sooner or later France will be in a similar situation: after all no French government has presented a balanced budget in the past 30 years - quite a feat. Even Germany after the colossal deficit induced by Reunification's costs (at least they had something to show for their deficit) managed to balance the books for a while, and Spain for several years in the 2000's ran a budget surplus. Sure their economy was prospering (not the case now) but the French government NEVER presents a balanced budget whether in lean or in fat years.

When will our leaders learn this simple truth: just like responsible family heads, no one can live beyond their means for ever. The day of reckoning is coming, has already come for some.