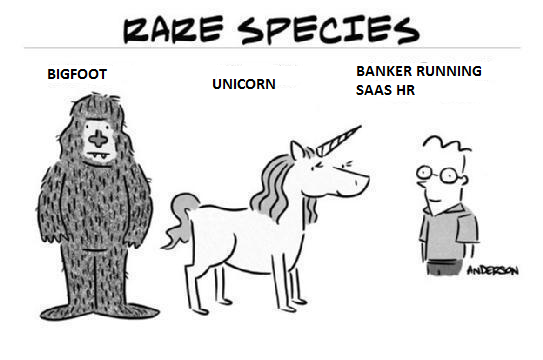 As traditional, on-premise corporate computing moves relentlessly to the cloud, especially its more sophisticated version, SaaS (software as a service)*, one business sector seems impervious to the march of History: the banking industry. Since banks spend more on IT than any other business, it is worth discussing what is holding up bankers (no pun intended) and wondering whether it is a question of time before the industry moves with the times, or will it remain as a quaint on-premise island in a sea of SaaS-based systems. In this post I'll focus on HR systems, since that is the corporate IT sector I have more experience in.

The changing landscape of international banking and how it will affect HR
Following the financial meltdown that started in 2007, banks are facing some unique challenges:


- More stringent regulations in all developed countries, though so far the bark has been worse than the bite. European banks have been faster at adopting so-called Basel 3 rules, thus giving them, counter-intuitively, an edge on US banks because, once the latter are hit, they will find their European counterparts better prepared.

- Some of the new rules, especially in Europe,  have to do with bankers' compensation. Senior managers will have to learn to focus on profits (see below comment). One of the challenges of HR leaders will be how to enforce a new culture where greed is no longer good, and where other aspects of performance are taken into account, rather than the obsessive focus on revenue.

- One such regulation has to do with block leave (or garden leave) which mandates that during a certain period of time employees have no access to email/systems/phone in order to restraint heir ability to engage in fraudulent activities. (Of course, I still receive email messages from some senior executives who are on such block leave - and I'm talking here about their their bank email!)

-  Increased use of technology, such as complex trading algorithms, which means that many jobs formerly done by humans  are now done by machines which do not threaten to leave you for the competition nor demand exorbitant compensation.

- The days of unlimited profits are gone, and that will have an impact on IT budgets. This would be a driver to move to the cloud since costs can be reduced substantially when your HR system of record is migrated from on-premise to SaaS.

- Most of the global investment banks are retreating from their global operations and closing businesses. This deglobalization will affect all players, with global powerhouses shrinking their global operations, and the size of their workforce, and a larger number of regional/domestic banks will become even more local in nature. The challenge for all banks will be to trim fat without cutting muscle.

- In emerging markets, such as Brazil, Turkey, China and South Africa, local banks will matter even more than the global one, a trend not really new as I witnessed myself when I started spending part of the year in Brazil and was shocked to see that  the local HSBC subsidiary had little in common with the European parent company. It was quite surprising, and humbling, to see that Premier status, despite HSBC's marketing slogans, meant nothing there. In that market, as in India (think ICICI) local talent prevails and is giving the global banks a run for their money, if that is the phrase. If global banks want to survive, they will have to learn to fly the right talent on the right opportunity, say from London or New York, to São Paulo or Singapore, close the deal and then back home. The type of skills necessary will be markedly different from what we currently see.

Better be safe than sorry
There are various reasons why bankers are reluctant to move to a SaaS HR system of record (note that for other HR functions, such as recruiting or learning, the move to SaaS started a while ago.)

First, HR systems of record, along with  core banking tools, tend to be particularly sticky here. This most conservative of industries tends to favor status quo systems, stressing their advantages ("We've been using them for so long") while drawing attention to some problems associated with  the cloud. The financial crisis, which revealed banks' boldness, has put the brakes on many innovative ideas. The cloud suddenly became particularly risky, and it is a brave HRIS leader that will push for it. Rarely does a banking head of HR even bother about it, feeling s/he has more urgent battles to fight.

The banking industry also has a long history of home-made systems, in use next to packaged software, the latter often customized beyond recognition, thus adding another strong incentive to stick to legacy systems longer than other industries. And yet the complexity of their  legacy systems will eventually force the banks to move forward and start considering SaaS more seriously.

Security, for obvious reasons a predominant concern with banks, has them look at SaaS with particularly watchful eyes. And NSA snooping has not helped the SaaS movement, especially in Europe, where banks are not particularly keen on having the integrity of their core HR data  compromised along with privacy concerns. It is safe to say that SaaS vendors are losing 10% of their potential revenue in Europe because of this issue.

As everywhere else, moving to SaaS entails cultural change that banks are not finding easy to make. A bank 's IT department with an army of PeopleTools or ABAP consultants will be reluctant to consider that it has a problem, and that it may not need these skills anymore. Often, HR does not have enough clout to stand its ground and insist on having its own technology.

Leading by example...where there is no clear example
HR departments in the banking industry tend to display pack mentality. There is a lot of hand-wringing, indecision and wait-and-see among HR/IT leaders, with everybody watching their counterparts in other banks to see who will take the plunge first. (Interestingly, their brethren in the insurance industry didn't have such qualms and have moved to the cloud much faster.) As the following graph shows, there have already been a couple of banks that have made the move to SaaS HR (adopting mainly Workday) but they tend to be tier-2 banks. None of the global behemoths have pulled the plug on their legacy HR (usually PeopleSoft), although several are looking at the SaaS model seriously.

Action items for a successful transition
Any successful move from legacy HR to cloud HR in the banking industry will need the following:

Banks should remember the unique characteristic of an HR system: it is the only IT system in a company where every employee is a user. Provide them with a rich interface and a modern user experience, and you are suddenly increasing your current and future employee engagement. Just as an earlier generation moved en masse from mainframe computing to a cloud-server environment, what are you waiting for, bankers, to move to SaaS?

No SaaS? You must be bonkers!


*For those who are confused about the terms "SaaS" and  "cloud", mainly because some  less-than-wholesome vendors use the two interchangeably, let me clarify some key differences. When a company's IT system no longer runs on its own data centers but is hosted by a third-party vendor, it is said to be "in the cloud" whether that IT system refers only to the hardware (network, for instance), the technology (database, OS) or the application (say, HR system.) When your application runs in the cloud, and the hardware and infrastructure are also managed by the same vendor, then we are talking about SaaS, the most advanced cloud offering. For software purists, as your humble servant is, you then have true SaaS (such as Salesforce, Workday, SAP's SuccessFactors) or faux-SaaS, a term I coined to refer to those products (such as Oracle's Fusion and the numerous legacy systems masquerading as SaaS) that were developed as an on-premise offering and then ported to the cloud, often in a single-tenant environment. True SaaS, on the other hand, is always multi-tenant, with a single line of code, is not available in an on-premise deployment, and only requires a browser to access the application.  In other words, a true SaaS product is always in the cloud; the reverse, however, is not true.

(Although the blogger, in his capacity as advisor-cum-consultant, has been involved with two banks on their legacy-HR-to-SaaS projects, the ideas defended in this post are his only, and do not reflect neither the banks' opinions nor their particular situation)